“We thought we were making clothes for our friends; for sort of art students, actresses and a few sort of um crazy people around Chelsea..I think, in a funny way, we must have anticipated what people wanted and I hated fashion the way it was, I wanted clothes to be far more casual and easy going and sexy.” -Mary Quant (BBC 4 Interview in 1971)

On busting on to the London fashion scene in the late 60’s and killn’ it! 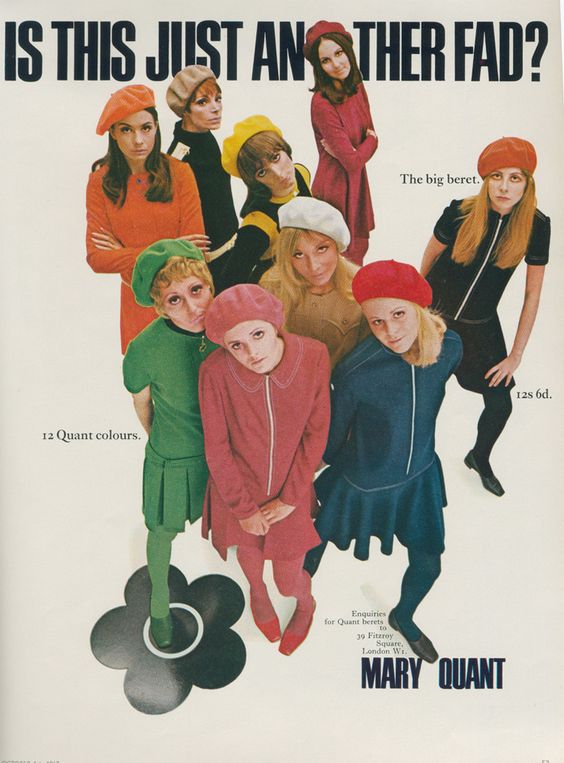 Jenni Murrey calls Mary Quant a “Game Changer” saying “For my generation, a teen in the 60’s, she blew away the twinset and pearls and covering your knees and brought in the mini and shoes you could actually walk even run in” (Presented by Jenni Murray BBC Radio 4 , Woman’s Hour, Wed 19 Mar 2014)

And that’s what is so inspiring; functional, fashionable and sexy! All three in one!

What you do is play both vids at once, use the music from the Fashion from 1969 vid (below) playing in the background as you listen to Mary in the 1968 CBC Archives (above) talk about making round shoes. It’s surprisingly awesome! 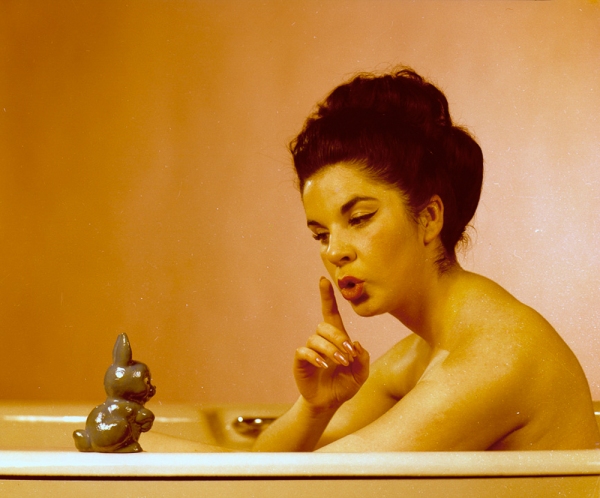 Some, well, interesting photos reblogged from my all-time FAV! Retronaut. These 1950’s and 60’s specimens where um err… not only uncomfortable looking poses are modeled but they are compounded by the presence of odd props…take a lookie lookie… 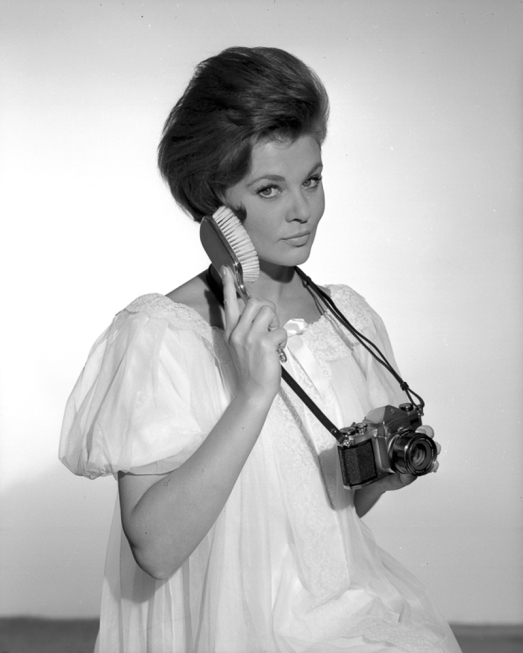 Note the…I can’t even caption this! Ahhh this brush is so soft I’ll take a picture in my nightgown…um…ok?

Or this …Let’s use pretty much everything in the studio and be sure to crank your neck so you look like you may fall off the ladder and remember, smile 🙂

You know I saw this stellar blog post and I really wanted to share it with you but then I had this pang of guilt, is it ok to reblog? Do people do this regularly…I think so, but I don’t want to be hated by those I dearly love, follow, admire . So you know what I did? I googled it, yep , I entered “Is it kosher to reblog?” right in that little white box and of course google didn’t answer my question, it got all caught up on the word “kosher”! Like nobody uses kosher except in the context of Jewish culture ! Then rabbit trail of of gold paved trails! I found this blog post, it answered the question of all questions, it was the quintessential google search outcome of all outcomes “Are Unicorns Kosher?” well here is the answer…

Unicorns are kosher. There was an actual talmudic debate and the current consensus is that unicorns are kosher. There is no conclusion to this paragraph, I just wanted to announce that I belong to a religion whose clergy members thought it was important to decide whether or not we could eat unicorns and then concluded that yes, yes we could, as long as the meat is drained of blood and not eaten with dairy. 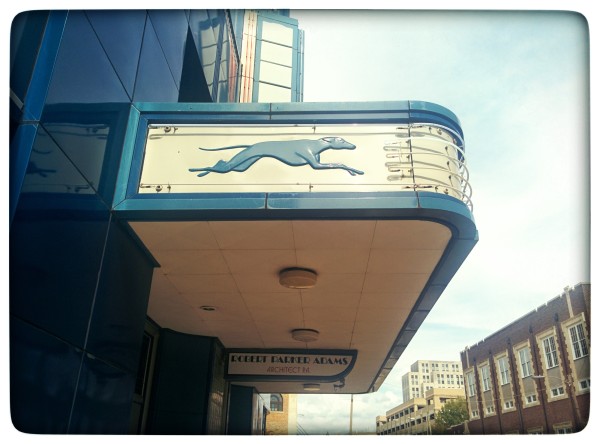 Work took me to Jackson, Mississippi  (I cant help but spell it out loud each time I write it, it’s this kind of chant that I learned as a child: m-i-s-s-i-s-s-i-p-p-i … doesn’t have the same ring when written out…sad ). I had never been to either Jackson or Mississippi for that matter, so it looked to be just  another city on a map, and  I really didn’t expect much beyond the usual conference scene, maybe some overcooked chicken dinners and for sure lots of hand shaking. But the city has such treasures and add to that an interesting history, of which I will now divulge the from my mental clippings of four days thither.

After orienting myself to my hotel and it’s surrounding, I began to take in what is Jackson Downtown. Each day walking down Lamar Street, in the morning from the hotel, coffee in hand, and on my return, sun setting behind faded buildings.

The curved steel and blue of a certain structure caught my gaze again and again, like something from a glamorous movie during the golden age of Hollywood! Luckily, downtown Jackson doesn’t have much going on so I could stand in the middle of the street  and snap a few pictures! 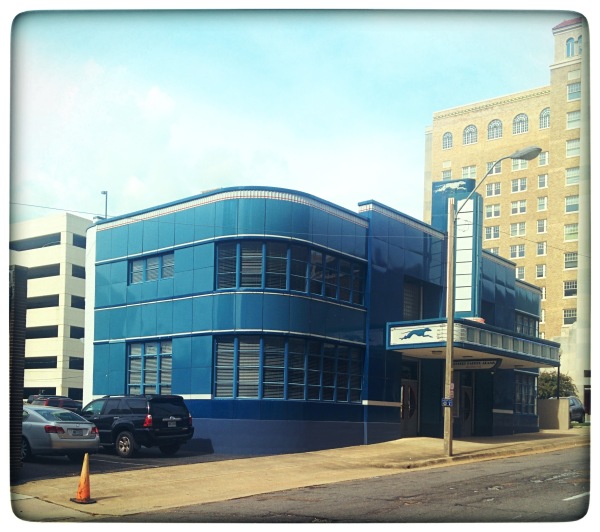 The Jackson Grayhound Station. It is fitting that it be a beautiful lone ranger in the otherwise banal high rises and brass pillars of it’s neighbors. My behavior of staring at buildings  and snapping photos like a NYC tourist did not go completely unnoticed.

The passers-by just shrugged hurrying off to their day time occupations. Jackson had an abandoned hush over it like an elementary school during summer. There was evidence of it being looked after, a nicely arranged pot of flowers here  and polished letters advertising a Law Office there…but people were few and far between. The ambiance gave me a Martian Chronicles feel and I studied the buildings like relics of a lost civilization. Who used to walk these streets? Men in double breasted pinstripe suits tipping their fedoras, the click click of heels, shop windows reflecting a navy wool skirt suit and red lipstick.

Researching the Old Grayhound Station, I found that it was the end point on the long journey for the Civil Rights protesters, The Freedom Riders during the early 60’s. They road buses to key locations in the movement, raising awareness for their cause and speaking to the masses of repressed and brave African Americans throughout the South (Kevin Levin, Professor Civil Rights Tour 2014 ).

It was restored in 1988 by a the local architect Robert Parker Adams and now houses his interior design offices. Wow! To have that kind of money to recognize an amazing building in need of a face-lift, buy it, and make it fabulous! What a gift to the city of Jackson. Luckily it wasn’t torn down for some 1980’s monstrosity of a cement bloc sky scrapper or meeting its end as another downtown fast food restaurant.

The Jackson Grayhound Station is a classic 1930’s Art Deco design built cerca 1937. Smooth lines, chrome and simplicity.  I read somewhere that the discovery of the King Tut’s tomb (1922) and the artifacts from within influenced the movement, but I couldn’t tell you where I read it so now it’s just something to ponder.

Here are some pictures of the interior, love love love the checkered floors, fenced reception and well just about everything! (Photos from The New Southern View ) 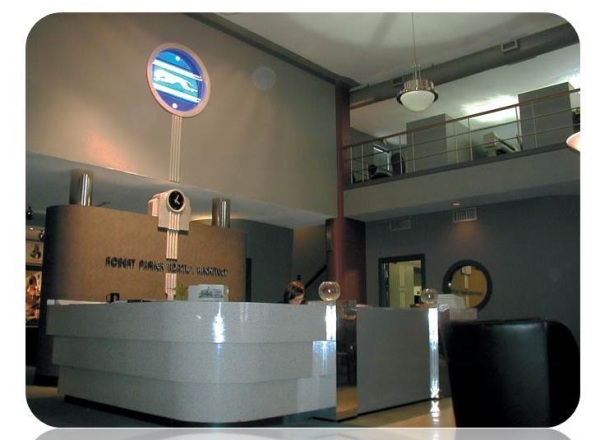 And I leave you with one more mystery, another historic building on the edge of downtown Jackson yet to be researched by this amateur blogger and photographer (did you see the ones I took?!? It’s all in the filter darling…sometimes I even impress myself he he).

Photos by Daniel and Geo Fuchs show the East German Secret Police compound or Stasi Facility. It’s like looking into a nightmare. The yellow vinyl chairs and sterile atmosphere, I can just imagine the florescent light flickering as a man with a bloodied nose and ragged clothing sits in a corner of a concrete cell.

I once read a series of memoirs published about living under the iron curtain in East Germany the book was called Stasiland (http://www.amazon.com/Stasiland-Stories-Behind-Berlin-Wall/dp/0062077325 ) These photos bring all that to life. 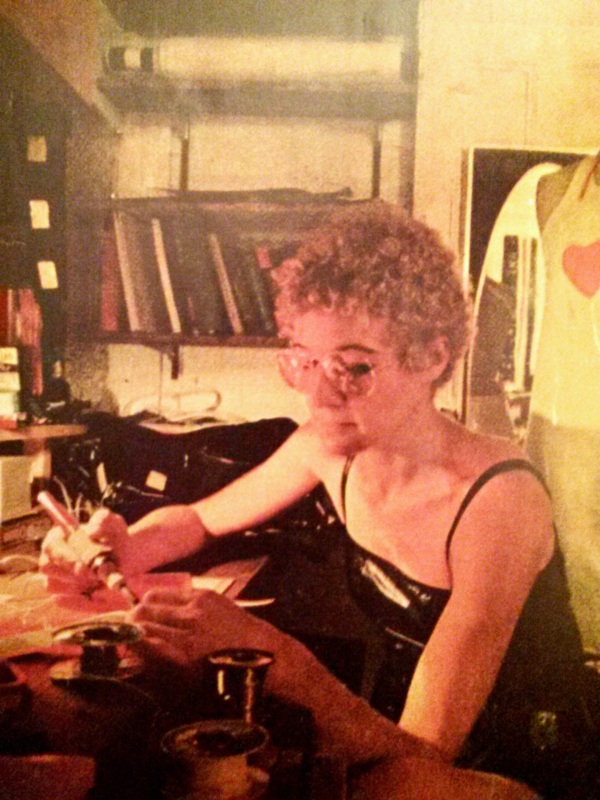 I found a 1968 copy of the Washington Post. A tattered cover illustrated with faded politicians and the Capital in the background. The big story was all about how America was mucking up Vietnam. I like reading articles from the 50’s and 60’s about US politics so I paid the 50 cents and brought it home. I like how these old magazines give a sort of cultural landscape a nation from years and years ago which has changed a lot from today… but sometimes is shockingly similar. For example this magazine had a feature article by Daniel H. Watts titled “America will Burn”

this author focuses on the racial problem in the U.S. He says that the popular concept of progress in the race relations in the U.S. is pure myth. He states that for over 300 years, African Americans have been obliged to carry not only the burden of racism but also white-liberal paternalism. The white man wants to be free to expand and exploit but an African American man perceives freedom as having an opportunity to enjoy life…

What I didn’t expect from the Washington Post was a 3 page spread on fashion icon Diana Dew, which is what my post will focus on today.

Hot lights, mod mini  and loads of references to psychedelia (is that a word? oh well I like it…like paraphernalia but totally psychedelic man)

Diana Dew was breaking edge in the club scene. Her small flexible battery packs added light to the garments she created. She was a pioneer, first being a woman (which is awesome) second being a designer who made functional art. 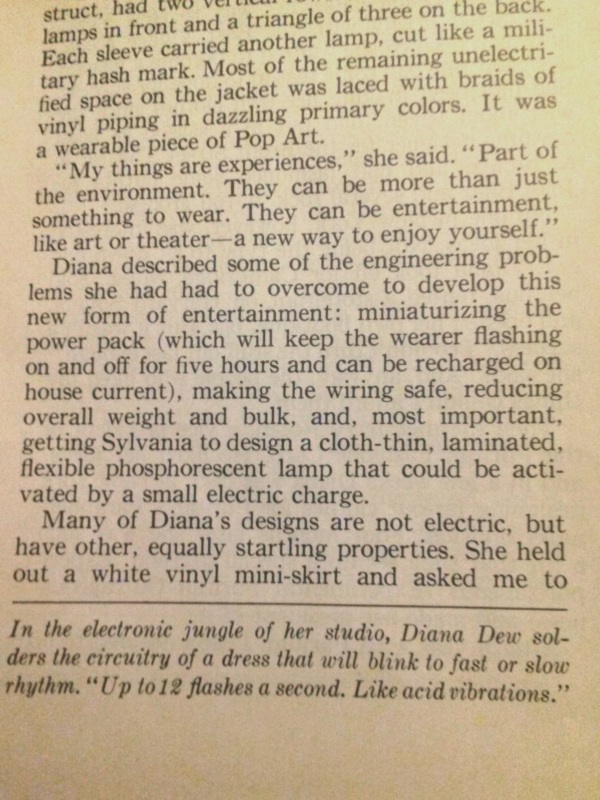 I guess later the technology she developed was purchased by the US government for space…but from the articles I read some of it went to less than admirable uses such as “interrogation” techniques for the Pentagon (yikes!)

Below she talks about her hippie roots… I hear ya! My hippie roots were def denying me a life of experience…wait…I grew up in a Baptist family in the 80’s …jk.

Did I mention my love of hearts…comes from my 80’s past and far too many hours of doodling…apparently these dresses only sold for $150-$250 who knows how much now but you bet I’d be wearing the one below! Def reminds me of the Carebears…but I’m okay with that, I embrace it.

Here are some more readings on Diana and her electric wearable pop art! Yay!